Snakes have been by far the most commonly seen reptiles during our time at Las Tangaras Reserve near Mindo, Ecuador. In fact, we’ve only seen one lizard and several snakes, including a pit viper. Many people concerned with snakes wear tall boots as protection (there are even tall, thick “snake boots” usually guaranteed against the bite of any North American snake) yet the famous botanical explorer of the Amazon, Richard Evan Schultes subject of the book, One River felt that short moccasins from L.L. Bean were adequate, saying that there are plenty of snakes that can bite you in the face (or at least above the boot level). If anyone knows about the Amazon region, surely Schultes did, even if his specialty was ethnobotany, his advice is good.
Though Mindo isn’t quite in the Amazon region, being too high in elevation and slightly to the western side of the Andes, some of the snake biodiversity is the same. We often wear tall rubber boots, but for mud rather than snake protection and sticking to trails with a minimum of real machete work, makes startling a dangerous snake unlikely anyway.
We have seen a pit viper once though, (sub family Crotalinae) which was distinct from most of the snakes we see by being extremely thick bodied. The best way to instantly identify a pit viper is by its head though, which is distinct in shape from the heat sensing “pits” behind its nostrils, which allow it to hunt efficiently at night. It was at night that we found the viper too; luckily it was a fairly shy snake, allowing me and the Chilean tourist I was with to snap a few photos before leaving but not letting us get close enough to put ourselves (or the snake) in any danger.

Erin and I have also had a couple of encounters with the Green Sipo (Chironius exoletus), the first time we were hiking on El Bosque trail above the reserve when a snake came shooting down the trail in our direction. Startled I jumped quickly out of the way, apparently looking ridiculous as Erin still laughs about the incident. The Green Sipo stopped a few feet in front of us anyway, just warily (or curiously?) watching us for a few moments, allowing me to take a few good photos before it disappeared into the bush. The second encounter with what I think was a Green Sipo was even more exciting. Erin and I were again hiking a trail in the same general area (this time Tucanes trail) when a snake burst across the trail ahead of us and deftly caught a small frog in it’s mouth, quickly disappearing into the foliage. We could hear the frog crying from it’s doomed position in the snake’s mouth as it was carried off.
The snakes I’ve enjoyed seeing the most so far have been neither viper nor sipo but the snail eaters. I mentioned the Andean Snail Eater (Dipsas andiana) in an earlier post; it was a small snake that we found curled up on our step sunning itself on the concrete, by the next day it had moved on.

A few days ago while walking the road from Mindo to the reserve I encountered a red and black snake, although it was small I was worried it was a dangerous coral snake. The gnomonic device, “Red on black poison lack, red on yellow can kill a fellow” might work in North America but in South America it’s useless and can get you into a very sticky situation. Still, the little snake was only sunning itself on a road, waiting to be smashed flat by a passing car and I’m not really a believer in nuisance animals or eradication of any native animal. So using a very long stick, I carefully scooped the snake up and moved it to the side of the road where it soon slithered away, probably grumpy at having a relaxing nap interrupted. When I got back to the reserve, I compared my photos with the book and discovered, the snake wasn’t a coral snake, or even dangerous. The snake I’d helped cross the road was actually a Graceful Snail-Eater (Dipsas gracilis). Undoubtedly, the Graceful Snail-Eater has evolved to use the dangerous look of a coral snake to its advantage. A mimic of a toxic or poisonous animal is less likely to be preyed upon by other animals (it is common for butterflies to look like more poisonous relatives and get eaten less often by birds), unfortunately for the Snail-Eater looking more dangerous makes it so one animal is more likely to kill it. Humans often kill the Graceful Snail-Eater when they mistake it for a Coral Snake, so goes evolution, a useful adaptation can become a detriment as the environment and the faunal assemblage changes. 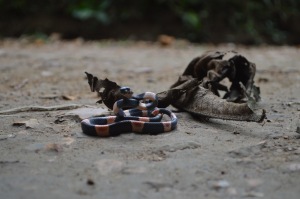