This essay is going to be published later this month on Naturewriting.com but I thought it’d be nice to put it up on my own site first.  I hope you enjoy it and it makes you think. 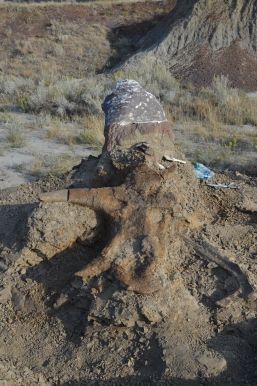 The dirt road across the northern South Dakota prairie was bumpy, especially in a large flatbed truck pulling a trailer loaded with a bobcat skid-steer.  The equipment and the truck were necessary to excavate a Triceratops skull and I was along as an employee of Black Hills Institute of Geological Research to help remove the skull.

At first the skull was just the tip of a horn protruding from a low hill in the Hell Creek formation.  Eventually one whole horn was uncovered, then two, then the nose horn and beak.  Glinting, dark teeth were found here and there amid the tan soil and brown clay. Two conical, pointed and serrated Nanotyrannus teeth were found, suggesting that the small carnivorous dinosaur may have killed or scavenged the Triceratops.  The other teeth were the strange, herbivorous teeth from Triceratops itself, teeth that grew in large batteries, new teeth aligned, waiting to replace the old as they wore out, much like sharks’ teeth today.

On a hillside behind the Triceratops, the scattered pieces of knobby, armored skull were found a year earlier.  These were part of a Pachycephalosaurus skull which sits in cardboard flats, embedded in dirt and rocks back at the lab piled on a table amidst power tools, glue bottles and various bones of other creatures from modern to Mesozoic.  Cacti and sagebrush dotted the tops of small buttes and the sand of dry stream beds threaded between and around them flecked with tiny pieces of fossil bone, some turtle, some crocodile, some dinosaur and many indiscernible.

Uncovering the triceratops involves turning over chunks of sediment with a military surplus bayonet and brushing dirt away with a large paint brush.  There is also the work of swinging a pick and scooping the broken earth away with a shovel.  I sweat; my knees become sharp, raw things against the hard packed soil, rock and fossils.

One night at a dig when my boss and I are alone, drinking beer and eating chips and salsa we watch a doe walking through the prairie grass.  The deer startled, at first we think we spooked the animal and then we see a coyote that surprised her slinking away in grass taller than the canid itself.  The sun rising over the grass in the morning glows on the tops of buttes and makes the prairie grass glow.  The stars at night are a chest of sparkling jewels.

It’s easy for the mind to wander as your eyes pan for the outline of a jaw, the sharp contours of a tooth.  As I was sorting through soil and broken rock, looking for bone, I saw a small thing moving.  A beautiful, tiny creature was cupped in my hand and I held it close to my eyes, peering.  A reddish animal with long, grasping pinchers was in my hand.  The whole arachnid was only about the size of an ant, perhaps smaller with intricate detail that could only be hinted to unaided human eyes.  I smiled deeply; this was the first pseudo scorpion I’d seen in person.  I had collected insects in a cave with a man who’d discovered a new species of pseudo scorpion in a Colorado cave, photographed next to a nickel, it made the coin enormous.  We passed the pseudo scorpion around so everyone could get a view of the strange, rare creature and I delicately set it down, a little away from where we dug.  Hopefully the pseudo scorpion had no problem making a new home in the soil.

It meant something to me that day to find a tiny arachnid, alive with the remains of a dinosaur.  It meant something to see the deer and the coyote and to nightly hear them singing.  Animals die.  We are animals and we die as well.  Everything that is alive succumbs to death.  Yet, the same life that flowed through the dinosaurs persists in us.  The life, the beauty and variety and power of this force that animates us is more important than us.  Life is more important than species or genera, it is the river and we are mere flotsam to be carried for a while and spit out in the end.  The river goes on.